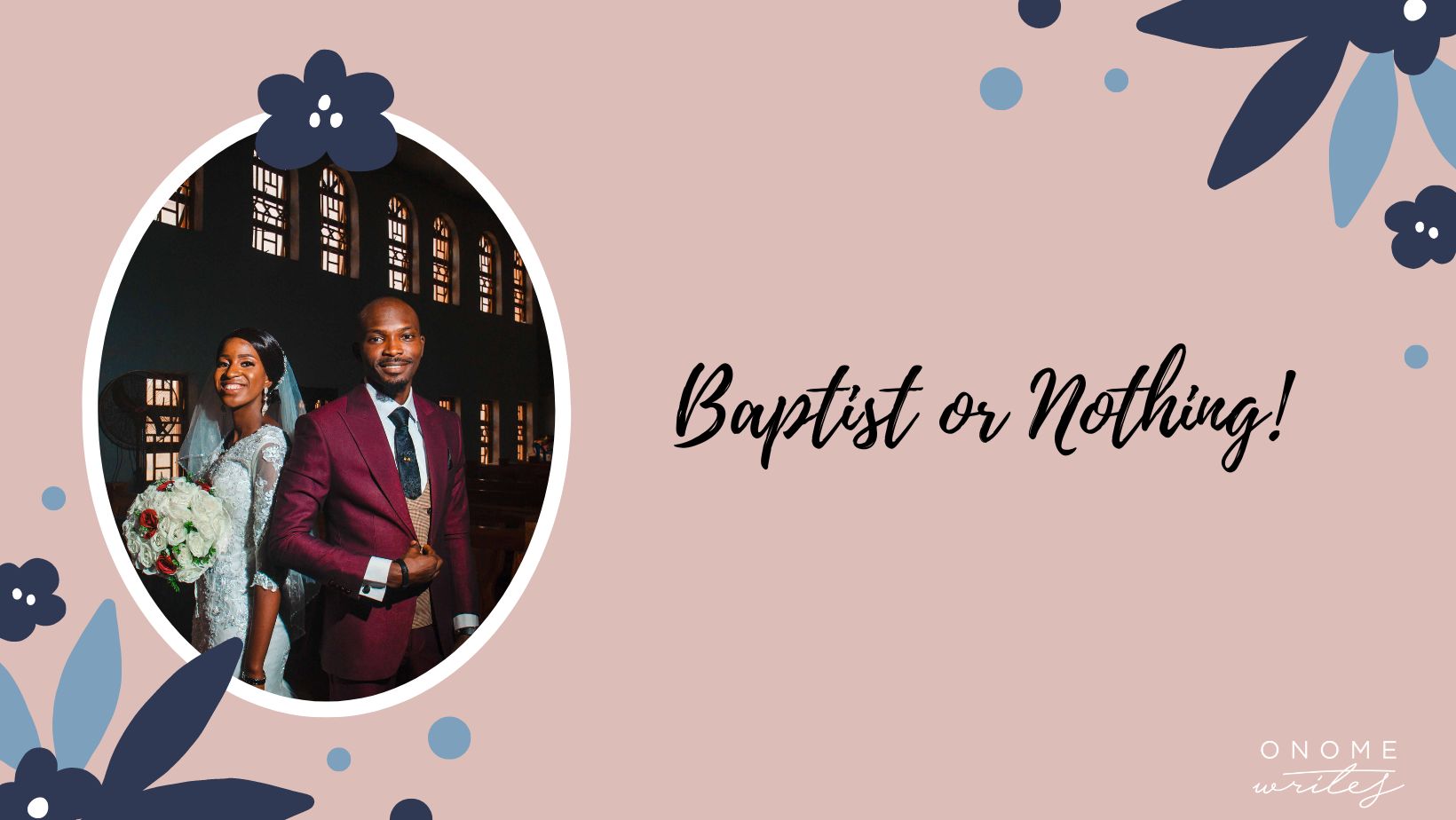 There was a time in my life when my dream was to marry a committed Baptist church member. I was born and raised in a Baptist church, and as far as I was concerned, my church was the best. I wanted my children to experience being rooted and raised in the Baptist church because I believed it was the only place the word of God was preached lol (blame it on my not going out).

If you have read my book Identity crisis, I mentioned that the Baptist church was the foundation of my church; all the lessons I learnt in my sunbeam, girls auxiliary and Lydia auxiliary is all part of my faith. The interesting part was that I was so naïve to believe that as long as he is Baptist, he is automatically a good man.

I remember trying so hard to find a Baptist man, I wanted a royal wedding by force (in the Baptist church, when a member of the Lydia auxiliary marries a member of the Royal ambassador, they have a royal wedding, which is always ceremonial with parades and uniform) but I have come to realize over time that a good marriage goes beyond that.

I once dated this guy who was a Baptist member; I had no business dating that guy because we had no chemistry and nothing in common. The only common thing we had was that we were dedicated baptist members and our folks were pastors. He liked me, but I felt nothing for him. I told myself I would grow to like him because marrying him meant our kids would experience what I experienced. Looking back, I was so selfish and silly. I wasn’t looking forward to his call and was eager to return home each time we saw each other. I waited for the perfect excuse to break up, but he was just so sweet. He did everything right, lol.

I can’t even remember how I broke up, but I had to come up with a lie. I knew I hurt him and felt terrible, but I knew if I married him, I would remain miserable for the rest of my life, and he would not forgive me.

When I decided to hand over my relationship to the lord, one of the idols he removed from my heart was marrying a Baptist man or nobody. The Holy Spirit asked me, “would you rather marry a man after my heart or make your decision?”. God worked on me until I reached the point of surrender and absolute trust that He has my best interest at heart.

At the end of the day, I did not marry a Baptist man, but I married the best man for me. I have seen Baptist marriages crash, and I have also seen those that flourished. My point is that a good marriage goes beyond the denomination.

I don’t know what your idol is. Yours might be a particular tribe, job or position. It goes for both genders. I have met men with ridiculous tastes, and I laugh because we often demand what we don’t have.

It’s time to surrender and trust the father. Rip off that list and start afresh. God knows the end from the beginning. Let God order your steps. Your assignment and calling are bigger than you, and whoever you are in a relationship with must understand that you are called to fulfil a purpose, and your union itself is to serve a purpose.

Marriage is beyond that list you are holding. Trust the father and watch him take care of you.