He Is not into me

Published by Onome Omodara on November 22, 2019 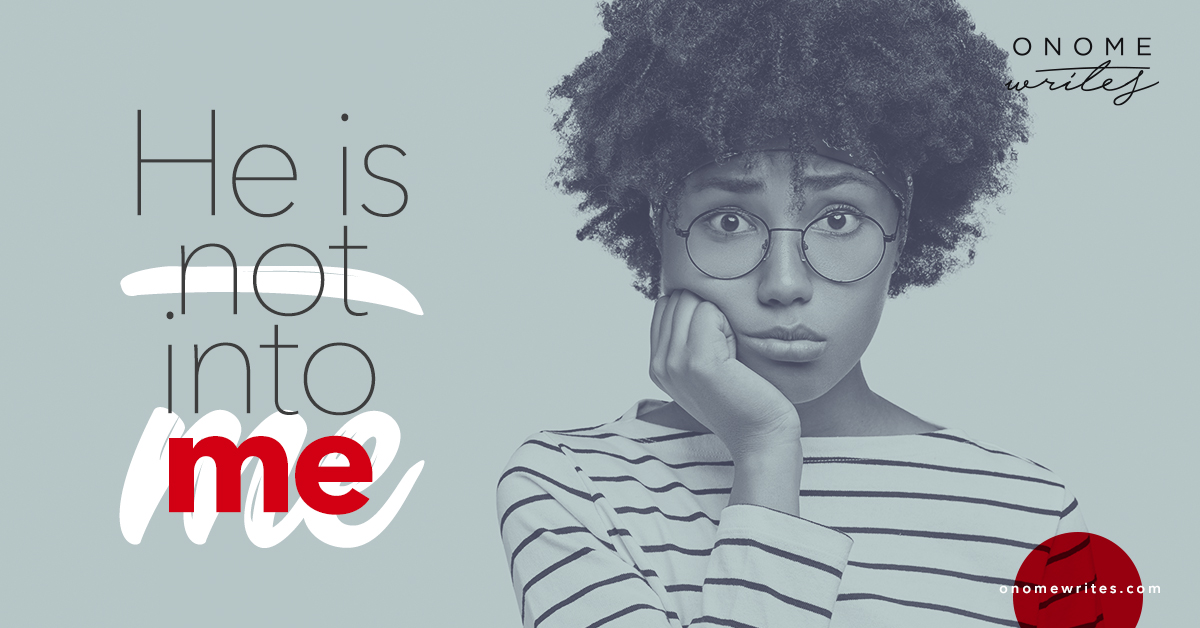 Have you ever wanted someone so bad but the person is not looking in your direction? Or has your love interest put you in the friend zone? I know that feeling; let me tell you my story.

I had eyes for him from afar and the first day we spoke, he said I was intelligent; this made me melt. Concentration was impossible whenever I was around him. I knew guys like him would never have anything to do with girls like me (I was first rejected by my low self-esteem). I was a nerd and a bookworm. I didn’t like parties so I was convinced he would never like me.

The first time we met, I liked him. We had a conversation on books and feminism, which led him to say I am Intelligent. He was impressed by my ability to hold an intelligent conversation, so he asked for my phone number. I knew he liked me but he was scared his friends would laugh at him if he had anything to do with me.

I desired him but we became platonic friends. I was that friend he would speak with for long hours on the phone but would avoid in public. I was quite comfortable being in the shadows; at least I was the girl he spent more than 3 hours over the phone with.

I wanted more but I only appealed to him intellectually. I was upset when he started dating a friend of mine. (She was sexy and cute; no surprise he went for her). I stopped picking his calls. I sent him a message when I found out he was with my friend but he didn’t reply to my message, so I let him be.

Some years later we reconnected and became good friends. We had both become mature and knew what we wanted from life. The problem was; my feelings were rekindled and this time it was intense. I wanted to deny my feelings but the more I tried, the stronger it became.

We had become best of friends and I didn’t want to lose the friendship, so I decided to play it cool, but deep down; I was in love. I prayed about it and heard a ‘yes’ (I actually wasn’t expecting any other answer). I started praying that God would convince him to ask me out but the prayer never got answered. I had to summon the courage to ask him.

I asked him what we were doing because we ended every phone call with “I love you” and he would call me sweet names. I needed clarity. He told me he loved me but was still praying about us.

I waited patiently but couldn’t pretend any longer. I needed to be sure where we were headed as I had no time to waste. I called one evening and told him we needed to talk. We spoke at length then he gave me the shock of my life. He said, “Bunmi, God is not saying anything about us”. I couldn’t hold back the tears. ‘What was wrong with me?’ I thought my days of singleness were behind but they just started.

I went back to God for healing. That was when I discovered it was never God’s idea but mine. I concluded on God’s behalf. It was a painful experience but looking back now, I am grateful it did not work out. We are still friends but it took me a long time to realize that we could never have worked out as a couple because our purposes do not align but I was willing to compromise because my feelings for him were so deep.

Here’s the thing; I know it hurts that he is not looking at your direction and that he sees you as a sister and a friend but you can’t force a man to love you! If he is meant to be yours, he will come around. You have to trust God to give you the best you deserve.

“Yet God has made everything beautiful for its own time. He has planted eternity in the human heart, but even so, people cannot see the whole scope of God’s work from beginning to end.” (Ecclesiastes 3: 11) NLT.

A lot of times we are in a hurry and we allow impatience to fuel our desires and influence our decisions but we have to be patient to get the best. I understand that you like him. He makes your heart skip when he is around and you can’t control your emotions. My sister, you need to relax.

There is time for everything. Relationships are way beyond butterflies in the belly. The one God has for you is always worth the wait. You don’t have to embarrass yourself and make stupid decisions to make a man love you.

You can’t force relationships; it has to happen naturally. You need to stop worrying your head about the how and the when. Let God write your love story because He has your best interest at heart and He loves you so much so, you can be rest assured he will give you the best.

I know it hurts, but you have to let him go so you can embrace God’s best for you. Begin your healing process and allow God to give you the best at the right time.

I look forward to sharing your love story!

Categories: Lifestyle, Love, Love & Relationships Tags: He is not into me, healing, heartbreak, Love, restoration